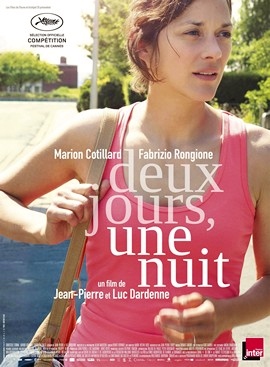 The Belgian filmmaking tandem, Luc and Jean-Pierre Dardenne, are well known for their minimalistic films, which focus on the economic burdens and moral ambiguities facing working-class persons in the Low Countries. Deux jours, une nuit [Two Days, One Night] builds on this foundation. Though it features a bona fide movie star in Marion Cotillard, it is a typically unassuming film, which presupposes that mundane concerns — even, and perhaps especially, when seen as mundane — best reveal the flaws and virtues of human beings.

Cotillard plays Sandra — a working mother in Seraing, Belgium, who has taken a leave of absence from her job in a factory. The reason for her leave is not explicitly stated, but it is psychological in nature. Sandra is alternately frenzied and wearied, and she pops pills in order to cope with anxiety. Supporting her through this process is her husband, Manu (Fabrizio Rongione), whose patient encouragement is equaled by the recognition that, if the family is to keep their home, Sandra needs to return to work. Unfortunately, however, the factory has been able to maintain productivity during her absence, so much so that the management has presented her coworkers with an offer: if they vote to liquidate Sandra’s position, they will provide a cash bonus to everyone on staff. After learning of this proposal, Sandra has only a few days (thus the film’s title) to convince her peers of her worth. With this in mind, she sets out to meet with each of them prior to the vote.

Though at times this quest strains credulity, the Dardennes resist the temptation to melodramatize it. Sandra is not so much a “hero” as a nervous wreck, and her coworkers are not so much villains as ordinary persons facing ordinary problems — rents, childcare, and the like. With only a couple of exceptions, none of Sandra’s opponents want to see her removed; it’s just that they need the money. Herein, then, lies the tension at the heart of the film: will these ordinary people be able to muster the courage to deny themselves what, in purely economic terms, makes good sense? And can Sandra summon the strength to ask them to do so?

Without divulging the ending, it is worth noting that, for the Dardennes, even these questions withstand the pat answers typical of Hollywood. Ultimately, Deux jours, une nuit is neither a comedy nor a tragedy but, rather, something in between. But in this “in between” is precisely where the film’s connection to theology lies. As the Christian tradition has long professed, the field of human activity certainly is not heaven, but it is not hell either. On the contrary, earthly life is shot through with ambiguity, and so the ethical challenge — for human beings, anyway — is not to vanquish evil but to pursue the good amid uncertainty. “Purity of heart is to will one thing,” Søren Kierkegaard famously wrote, and yet willing the good and possessing it are two different things. Indeed, to will the good unreservedly may very well entail that one lose something. Alas, this is a lesson that Sandra must confront, though, as the gospel emphasizes (Lk 9:23-24), she also learns that sacrifice is the condition for new life.