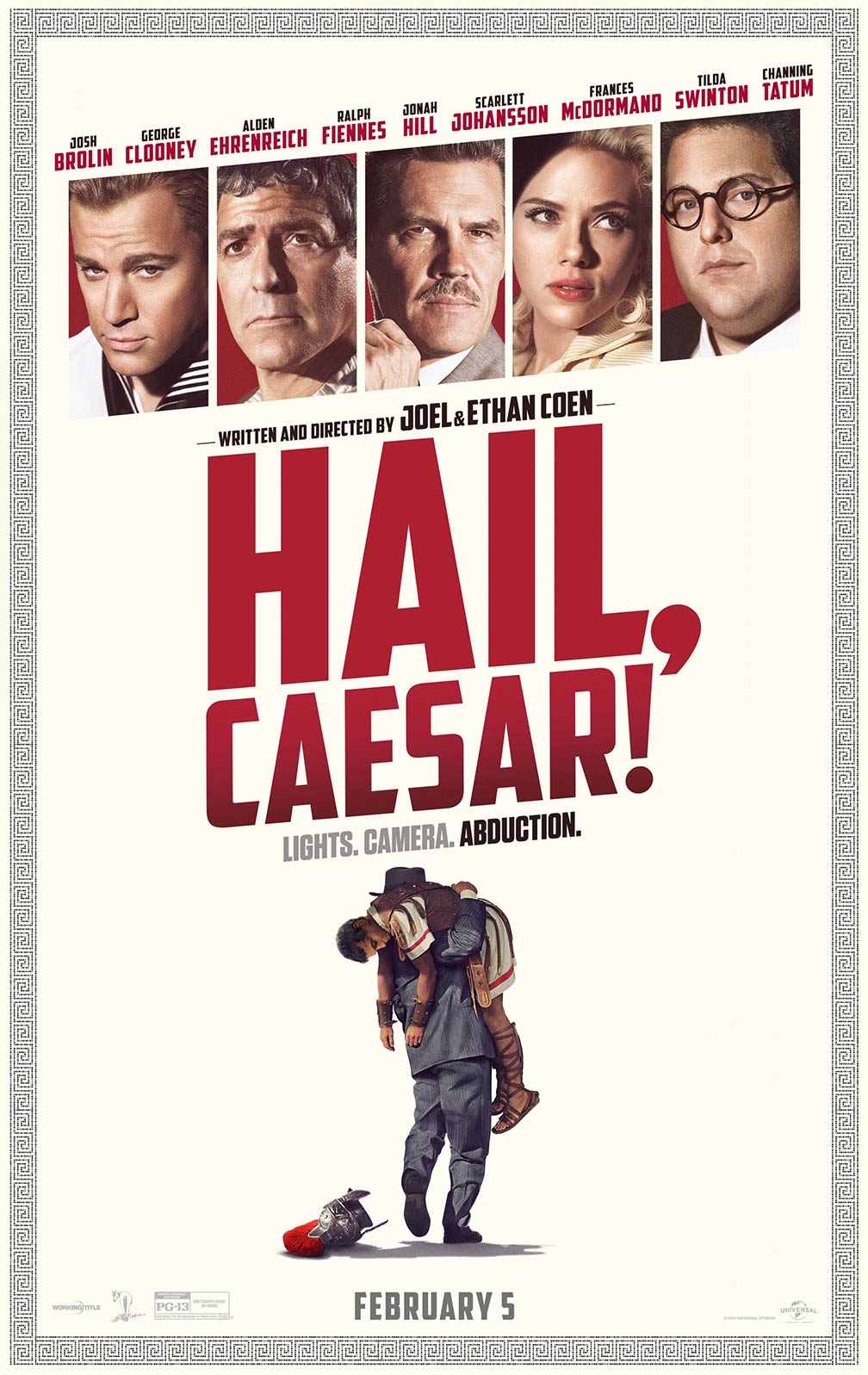 Plot  The film is set in Los Angeles, 1951. Capitol Pictures’ executive, Eddie Mannix (Josh Brolin), works tirelessly to keep the scandalous behavior of the company’s stars out of the press. Hilarity ensues.

Themes  Though in many ways a screwball comedy, Hail, Caesar! introduces a number of important themes. The most obvious one is that of the entertainment industry itself, which the Coens satirize with knowing affection. Not only does Mannix have to deal with egomaniacal actors, demanding executives, gossip columnists, and aggrieved writers — the latter being communist sympathizers who, led by Herbert Marcuse (yes, that Marcuse), wax poetic about Marxist theory and “the new man” — but he has to do so with the public in mind, making sure that the best “picture” is made. It’s enough to make a man feel servile, and that, indeed, is what a recruiter (Ian Blackman) from The Lockheed Corporation tells Mannix in a series of meetings at a dim Chinese restaurant — namely, that life in Hollywood amounts to little more than a joke, while “real work” is being done by the military-industrial complex.

And yet — in Hail, Caesar!‘s second major theme — Mannix can’t escape the feeling that making films is important after all. Artistic work gives expression to humanity’s greatest hopes and dreams, and filmmaking is the modern world’s quintessential art form. Thus cinema is uniquely suited to “embody” (to borrow Mannix’s phrase) sacred stories such as “the tale of the Christ,” which, in fact, is the subtitle of Capitol Pictures’ latest “prestige” movie, Hail, Caesar!. With this in mind, Mannix hosts a gathering of religious leaders, hoping to convince them that the film takes its religious subject matter seriously. “Does the depiction of Christ Jesus cut the mustard?” he asks with amusing frankness. The ensuing debate is not only comical, but it hints at the challenges of any rendering of the sacred:

To be sure, as Mannix well knows, what goes on behind the scenes of any cinematic project is messy, though the finished product may nevertheless foster genuine inspiration. The Coens, it seems, are too ironical to explore this latter point in detail, though one scene comes close. While filming the climactic scene of Hail, Caesar!, the film’s pampered star, Baird Whitlock (George Clooney), delivers a long soliloquy on the person of Christ. For a moment, everyone in the studio stops what they’re doing, transfixed by the notion of this loving and merciful Savior — that is, until Whitlock forgets his line (the word “faith,” not coincidentally) and the director is forced to cut the scene.

Still, despite the disarray of the artistic process, Mannix comes to believe in his work. A pious Catholic, he confesses to his priest that he is tempted by the Lockheed position, because it would be “easy.” In contrast, the motion picture business is “hard” but “seems right.” The priest, sympathetic yet wearied by Mannix’s scruples, softly responds, “The inner voice that tells you what’s right — it comes from God, my son.” Mannix, in turn, darts from the confessional, now certain that his career is a calling. As he puts it earlier in the film, “You have worth if you serve the picture.”

Verdict  Hail, Caesar! is not one of the Coen Brothers’ masterpieces, but it is masterful all the same. The film is that rarest of rare breeds — an intelligent comedy. Of course, this is a genre to which the Coens have already contributed in films such as Raising Arizona (1987) and O Brother, Where Art Thou? (2000). For those who have ears to hear, Hail, Caesar! is likely to join their ranks.