It has not been my usual practice to review television shows on this site. I’ve only done so once before, when I wrote about Breaking Bad way back in 2014. It’s not that I don’t watch television; on the contrary, there is too much good content to ignore, from The Wire to Mad Men to Game of Thrones (to mention just a few). Yet, with shows running for multiple seasons and featuring several episodes per season, it is nearly impossible to sum up their main characters and themes in a short blog entry. The Netflix series Stranger Things is certainly no different. Already two seasons in length, with seventeen episodes wrapped and more to come, the show has already outstripped what I can address on Theology + Movies. But it has become so popular that I wanted to offer a few observations about it. Indeed, while I regularly show film clips in my courses, many of which are utterly foreign to my students, Stranger Things immediately strikes a chord. Millennials may not know Taxi Driver from Driving Miss Daisy, but, in my experience, they know pretty much everything about the (fictional) small town of Hawkins, Indiana and the strange events that took place there in 1983.

The first season of Stranger Things centers on the disappearance of Will Byers (Noah Schnapp), a 12-year-old boy, whose bicycle is found abandoned in the woods near his house. The local police chief Jim Hopper (David Harbour) initially assumes that Will has run away, but a slew of mysterious coincidences suggest otherwise. The trouble is ultimately traced back to the nearby Hawkins National Laboratory, where a sinister yet brilliant scientist (Matthew Modine) has unwittingly opened a portal to the “Upside Down” — a dimension that normally runs parallel to our own but now interlaces it with disastrous consequences. A monster known as the Demogorgon has been unleashed, and it now lurks among the inhabitants of Hawkins.

The question is: how can the inter-dimensional portal be closed, the Demogorgon vanquished, and Will retrieved from the bowels of Upside Down, where he is hiding from the relentless and hungry demon?

In a manner reminiscent of classic Spielberg blockbusters such as Jaws (1975) and as E.T. the Extra-Terrestrial (1982), Stranger Things showcases a tension in how this threat from beyond is handled. On the one hand, there is the governmental response, which is as concerned with snuffing out those who would expose the danger as with eliminating the danger itself — thus a team of jackbooted bureaucrats, who prowl about Hawkins in the hopes of containing the Demogorgon without alerting the public. On the other hand, there is the grassroots effort, headed by a ragtag bunch of benevolent misfits — thus Will’s buddies, science nerds and lovers of Dungeons and Dragons, who traverse the alleys and backroads of Hawkins on their BMX bikes. Of course, the government has greater resources, but Will’s friends have the insight and moxie to get to the bottom of things, not to mention the invaluable assistance of “Eleven” (Millie Bobby Brown), a mysterious girl with psychokinetic ability who is linked to the Hawkins lab and thus to the Upside Down. As time passes, Eleven becomes arguably the leader of the group, even as she seeks to understand her real identity and the purpose of her considerable powers. After all, the Upside Down’s threat to Hawkins has only just begun, and the second season shows that the Demogorgon, however terrifying, is actually part of an ecosystem of evil.

This is a very rough outline of the series to date, but it should suffice to set up a discussion of the key themes of Stranger Things. Indeed, it is a show begging for allegorical interpretation. Rep. David Cicilline (Democrat, Rhode Island) has argued — on the House floor! — that Stranger Things is a metaphor for American life under the administration of Pres. Donald Trump: “We are now stuck in the Upside Down,” he said, “right is wrong, up is down, black is white.” Others have seen the series as a metaphor for children who are coping with trauma. A more patent line of interpretation has focused on the links between Stranger Things and Dungeons and Dragons. One character in Stranger Things refers to the Upside Down as the “Vale of Shadows,” an appellation that is not officially tied to the D&D canon but does appear in a D&D-themed video game known as Icewind Dale. In any case, this hermeneutical pliability at least partly explains the popularity of Stranger Things: not only is it a well-written, well-acted show, but it can seemingly mean whatever one wants it to mean.

For that reason, a theological reading of Stranger Things is perhaps inevitable. The series is clearly an attempt to “re-enchant” suburban America, where religious affiliation continues to decline in favor of a techno-therapeutic understanding of human existence. Stranger Things, in contrast, takes an almost Pauline approach to daily life, depicting it as the site where otherworldly “principalities and powers” (Eph 6:12) intervene in human affairs, bringing death and destruction in their wake. In the face of this threat, people have to unite together, forming a like-minded “assembly” (in Greek, ekklesia) of those attuned both to the danger and to the virtues that can resist it. That is not to say that the members of this assembly are perfect. Some are vain, some naive, some unhappy. And yet, their flaws serve to make their union all the more poignant; they are not so much a “dysfunctional family” as a collection of dysfunctional individuals who, in love and for love, are able to overcome their personal failings for the sake of the common good.

This point gestures toward one of the more striking aspects of Stranger Things: it is an earnest and at times sentimental show, which bears a palpable ethical undercurrent. For a series already known for nostalgia, this is arguably its most nostalgic element. So much television today is nihilistic, featuring a senseless universe in which evil prospers and good languishes — if good exists at all. This drift toward nihilism began as a counteraction to the sort of entertainment in which every story concludes with a feel-good, socially acceptable “moral.” So, initially, it was an overdue correction to what had become a stale and meaningless formula. What Stranger Things suggests, however, is that the nihilistic correction is now in need of correcting. What, one might ask, are we really learning from the Walter Whites and Don Drapers of recent television — that, in the end, there is really nothing to learn, that violence (economic or physical or psychological) has the last word in early affairs? In contrast, Stranger Things implies that there is meaning in life, and that this meaning lies precisely in the refusal to surrender to meaninglessness, in love’s painful triumph over fear and death.

Is Stranger Things, then, merely a thinly veiled attempt to smuggle Christianity onto Netflix? Some commentators have made this case, but such a reading, while not uninteresting, is reliant upon an elaborate and often strained allegorical method of interpretation — one, moreover, that elides that show’s  flirtation with gnostic (as opposed to Judeo-Christian) metaphysics. The Upside Down, for example, has the appearance of a purely dark and nefarious place, where the wicked prey upon the innocent: 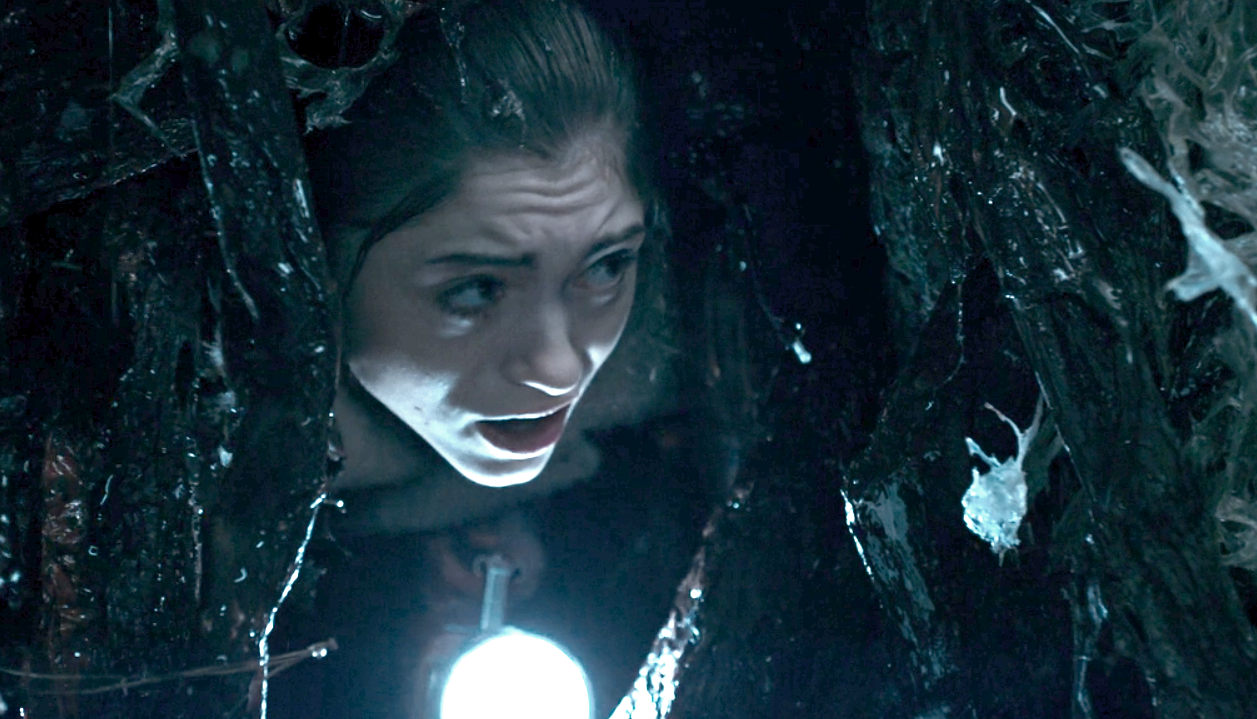 Peering into the Upside Down.

From the standpoint of traditional Christian doctrine, such a dimension could not have been created by the deity. That is to say, such a dimension could not exist at all; death, sin, and suffering are not created realities per se but privations of a good that is always already ontologically prior. In contrast, Stranger Things seems to give independent agency to the Upside Down and (in Season 2) to the “shadow monster” who controls it. Here evil is presented as a thing in and of itself, distinct from the good and against which the good is locked in perpetual struggle.

This point raises a curious question about the tendency of “morality tales” to adopt a dualist perspective on reality. “Good versus evil” is an exciting, palatable, and ostensibly reasonable storyline, whereas the Christian understanding of creation, fall, and redemption is paradoxical (e.g., postlapsarian humanity is at once free and unfree, God loves those who hate God, etc.) and thus resistant to facile dichotomies. Of course, to make this observation is not to criticize Stranger Things. It is simply a reminder that the Christian story remains a “stumbling block and foolishness” (1 Cor 1:23) — even for a show otherwise amenable to a theological reading.